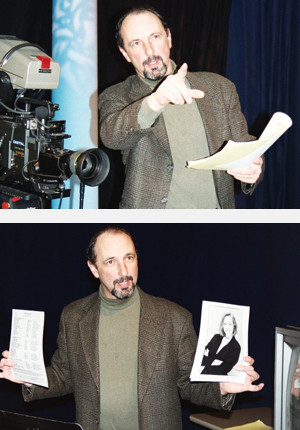 As a director, Bruce has worked in off-­‐Broadway, regional and educational theatre mediums as well as directing countless film dubbing and ADR projects, with actors such as Robert DeNiro, David Morse, Olympia Dukakis, Liam Neeson and others. He is currently, along with his wife, Kristin Reeves, the resident director at the Saddle River Day School, directing all straight play and musical productions. For more specific information, check out his directing CV on the resumes page.

As a teacher, Bruce has taught full courses and master classes in colleges, universities, academies and high schools across the country. For more specific information on his history, check out the teaching CV on the resumes page. Some of the courses Bruce provides are:

College Audition Prep: Private or small group.  Along with my wife, Theatre professor Kristin Reeves, we help the student select the perfect audition pieces to show off their strengths from our large collection of Contemporary and Classical plays.  We then coach them through the development of the pieces and direct them so they are ready to walk into that audition and give the best performance they can.  We have had tremendous success with this and many of our students have gotten into their first choice schools.

Fundamentals of Acting: Introducing the student to the basic skills of character development, physical and emotional self awareness and simple improve skills.

Scene Study: Here we break down scenes, find beats and work with partners to develop character and story arcs. We analyze text and character motivations.

Musical Theatre Performance: Much like the Scene Study only adding on the seamless transition between scene and song. Learning how to approach a song as an extension of the overall scene and use the music and lyrics to further the character’s intentions.

Song Deconstruction: Here we break down a musical theatre or pop song into acting beats to find the full meaning of the composer’s intentions. We work on the songs lyrics as dialogue to tell the story within the song.

The Business of Show Business: This is a course every school should offer, but rarely does. Here we will cover all the aspects of building a career in the professional theatre, film and televisions worlds. We will cover marketing the most important product in these fields, YOU. We will cover agents, the unions, casting directors, audition etiquette and preparation. We work on building the student a good resume and finding the right photographer for him or her.

Audition Workshops and Prep: Here we work on preparation for auditions of all types. We will cover, cold readings for theatre, film or television and singing. We will find the right material and work on complete performance aspects of those pieces.

Acting for the Camera: Here we explore the subtle yet complex differences of acting for the camera. How to bring scene work down to play to an audience, which is only inches away. The skills of hitting marks and playing off camera scenes and the development of a character which may be played out of sequence from the script.