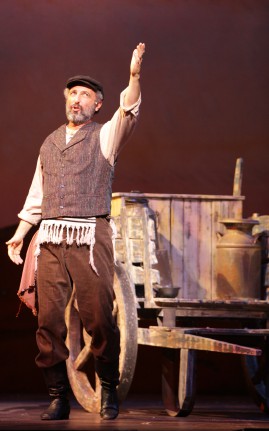 Petronella’s relationship with Mr. Van Dann (Bruce Winant, so good at being boisterous, then  broken) provides another burst of the real as they bicker and expertly pick at each other’s scabs, as only longtime partners can.  They love with the same vigor; she shields him when he is threatened with expulsion for pilfering bread.

In addition to a deep, warm voice and funny delivery as Tevye, Bruce Winant emotes turmoil as his eyes meet the anguished ones of his oldest daughter, when she begs her father not to make her marry the elderly butcher.

Bruce Winant excels as Tevye.  The key to any Fiddler is, of course, a strong actor/singer in the lead role.  Visiting actor Bruce Winant fills that bill admirably and carries the show like it is a bag of feathers…More importantly, Winant has an outstanding voice that more than does justice to such indelible classics as Rich Man and Sunrise, Sunset.

Bruce Winant was remarkable in the role of Tevye. Through an impressive and powerful voice, and a strong presence on stage, Winant convincingly portrayed the definitive Father figure, who longed to hold on to traditions, and to demonstrate his role as the decision maker for his familial brood. Slowly, as the traditions and customs start to slip away, the character of Tevye started to adapt and change. Tevye can be a very complex character- one with many layers, and angles to his personality. I felt that Mr. Winant was very convincing in this role, and was the epitome of what audiences should expect from an actor portraying this it.  For me, Mr. Winant is one of the best actors to interpret this role, and should be regarded with the same talents as Topol. I thoroughly enjoyed his portrayal of Tevye and feel quite certain that his genuine nature and amusing character will be a treat for all audiences of Fiddler on the Roof. Standout musical numbers of Mr. Winant include the extraordinary rendition of “If I Were a Rich Man,” and the opening audience-pleaser, “Tradition.” Bruce Winant is the most widely traveled performer in the company, and his experience is evident. Winant is as silky-smooth as we expect the slick Argentine leader to be, and we get the impression that his very presence on stage is largely responsible for elevating the performances of his fellow actors.

…and Bruce Winant is a true talent who complements Eva perfectly and, as was pointed out to me, actually resembles Juan Peron.

Bruce Winnant is the proud President Juan Peron, whose dedication to his people and tender love for his Evita are presented beautifully. New York actor Bruce Winant, seen here last year as the lovable Tevye in “Fiddler on the Roof”, is full-voiced, stalwart and amusing as a frustrated King Arthur, who can’t understand why nobody – especially mud-caked peasants – will take him seriously about forming the Round Table and going on a quest. Winant’s resonant baritone adds depth to an essentially straight-man role.  He can’t even get respect from his faithful servant Patsy, who patiently clip-clops cocoanut shells behind Arthur when the king thinks he’s riding a horse.

After all these decades, most audiences are so used to Topol’s movie version or Zero Mostel’s Broadway cast album of “Fiddler”, that anyone else doing the role of Tevye seems strange, perhaps even a bit suspect. But it takes BRUCE WINANT, the broadway veteran who heads this new production only a few minutes to sweep the audience up in his own genial take on Tevye. He wins them over completely! Winant has a naturalistic approach. He isn’t portentous or stagey in his paternal pronouncements and delightfully skewed observations. He is more conversational, more real; therefore, crisper and fresher in his delivery without losing any of the emotional impact. Winant is also thinner, making him look more credible as a peasant who actually knows hunger in oppressive Tsarist Russia in 1905.

I have seen four different productions of Fiddler in my reviewing career, including the most recent Broadway revival. But BRUCE WINANT completely blows them out of the water. Winant is flawless, his voice impeccable, his stage presence is undeniable and I would say plenty more if I had my thesaurus handy and opened to the word, incredible.

Above all else, BRUCE WINANT truly set this show apart as a brilliant theatrical gem in the Oakland hills.

The Woodminster cast is led by BRUCE WINANT in a fine performance in the role of Tevye. He carefully balances a life of strict adherence to the good book and that of a soft hearted man with great understanding.

As Anne’s parents, BRUCE WINANT and Cathy Newman prove to be great fun, particulary among our area’s politicrats, as they portray the churlish politician and his subservient wife.

BRUCE WINANT had us in stiches as Anne’s father Dindon.

BRUCE WINANT and Cathy Newman display great comic versatility as both the Dindon’s and Renaut’s.

Man of La Mancha Theatre by the Sea WINANT is extraordinary in the demanding title role, and his remarkable stage presence is matched only by his powerful voice.

Broadway veteran BRUCE WINANT is smooth as silk in the lead role of Don Quixote. His rendition of the show’s signature number, “The Impossible Dream”, alone is worth the price of admission.

Broadway veteran BRUCE WINANT is brilliant as Cervantes/Don Quixote. Winant nails “The Impossible Dream” and has the skill to keep the song far from the treacley mess it can become. It is a wholly enjoyable performance.

Some of the most poignant scenes are between Erik and Carriere, played with authority and a strong voice by BRUCE WINANT.

As Gerard, it’s up to BRUCE WINANT to deliver the emotional punch of “You Are My Own”…He Succeeds!

Some of the more dramatically enthralling spots are from the opera house’s former manager, Carriere, played by BRUCE WINANT.  All the drama leads to Carriere’s final, touching revelation to Erik.

The show-stealers, though, were BRUCE WINANT and DC Anderson as the theatre managers. Every time they stepped on stage, the show came to life.

And there are other pleasures to be found, mainly in the excellent supporting cast. BRUCE WINANT and DC Anderson as Messieurs Firmin and Andre, the hapless duo who buy the haunted opera house, draw laughter in every appearance.

All the performances are remarkable, including BRUCE WINANT as M. Firmin…which frankly, should be expected from a cast with such Broadway pedigree.

BRUCE WINANT and DC Anderson are both excellent as the fussy and harassed managers of the Paris Opera House.

As Roxie’s hapless husband, BRUCE WINANT milks his few moments for all their pathetic amusement.

Other wonderful performances came from BRUCE WINANT as Amos Hart…